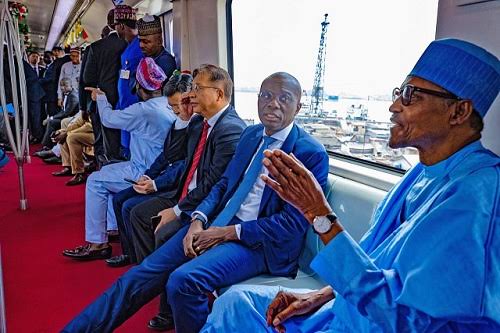 President Muhammadu Buhari, has commissioned the first phase of Lagos Blue Line Rail system from Marina to Mile-2 axis of the state.

The Blue Line is one of the six metro lines in the Lagos Rail Mass Transit (LRMT) master-plan, as contained in the Lagos State Strategic Transport Master Plan, STMP.

Governor Babajide Sanwo-Olu of Lagos State, in his address, commended the president for honouring his administration with a two-day official visit to Lagos State.

He said: “The state has enjoyed great support since Buhari became president. President, we are very proud to be associated with your bold national vision for infrastructural transformation.”

The iconic Marina station, is said to be the largest train hub in Africa, 240 metres long.

It is equipped with two concourses of 12 turnstiles each with a processing capacity of 480 passengers per minute and over 24,000 per hour.

Travel time on the Marina – Mile 2 route is about 15 minutes. It will be powered by high-voltage electricity (750VA).

“This iconic Marina Station that is hosting us today will be the largest and busiest train hub in Africa, with a capacity to process  as many as 400 passengers per minute, translating into 24,000 passengers every hour.

“When Phase One starts running fully, we envisage that it will transport a quarter of a million Lagosians daily, rising to half a million daily when the entire corridor is completed.”

Chinese Ambassador to Nigeria, Mr Cui Jianchun, hailed the government for the initiative.

He noted that the project was proof that Lagos, as a great city, understands that time is money as the train will reduce travel time considerably.

He believes the LRMT Blue Line will improve the efficiency of Lagos residents at work.

He said: “Time is money, efficiency is life. Today we understand the meaning of time, we need to sustain the usage of time for greater efficiency.

“This project has reflected the harmony and sympathies for both China and Nigeria.

“China and Nigeria have turned into a new era and embarked on a new journey to build a modern and social economy.

“We are embarking on new infrastructure and also a new era to develop our economies.”