The Nigerian Union of Railway Workers (NUR) has demanded the immediate reversal of the naming of the Apapa Railway station as Senator Bola Ahmed Tinubu Railway station. This position was made known to Transport Day by the General Secretary of the Union, Comrade Segun Esan.

According to the union, “We have received the news, through the media just like other Nigerians, of the naming and renaming of some railway stations by the Hon. Minister of Transportation, Mr Rotimi Chibuike Amaechi, after some distinguished Nigerians, dead and living, who have contributed significantly immensely to the development of their communities and Nigeria at large.

“The naming and renaming of the railway stations done in preparation for the return of rail transport services after it has been in a complete lockdown for about five months is, without a dint of hesitation on our part as a Union and body of workers of the Nigerian Railway, very commendable and in line with global best practice as concerned the use of monuments and national facilities as reminders of heroes and great citizens who had contributed to the development of their nations and communities.”

However, the union stated that the “Apapa railway station, after the painful death of our beloved late Alhaji Waziri Kyari Mohammed in a Bellview plane crash which occurred on 25th October 2005 at Lisa in Ogun State, was most officially named after him who until his untimely death was the Chairman of Nigerian Railway Board. 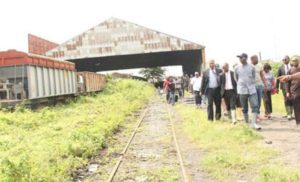 “Late Alhaji Waziri Mohammed toiled and laboured passionately and relentlessly for the emancipation of the Nigerian Railway system with verifiable intentions to impact positively on the welfare and wellbeing of the railway workers before the cold hands of death took him away.

“He died while on active service to Nigeria through Nigerian railway. The only thing that reminds the Nigerian Railway community nationwide of the sterling contribution of late Alhaji Waziri Mohammed to the development of Nigeria in the Nigerian Railway is the Apapa Railway station named after him.

“Convincingly so, we exist in the reality of the undeniable fact that late Alhaji Waziri Mohammed, more than any Nigerian and as a concept that he truly was, deserve his rightful place in the history and geography of Nigerian Railway and also in the indomitable heart of Nigerians and the railway workers who remain thankful and appreciative of him for his unquenchable passion and enthusiasm for a better railway and happier workers.

“We earnestly demand justice for our glorious dead, Alhaji Waziri Kyari Mohammed, by returning his name to Apapa railway station. Let us not rob the dead to pay the living because, someday, we will all be dead!”.

NUR said nonetheless that “the Hon Minister of Transportation has the backing of the Nigerian Railway workers in his patriotic enterprise of reviving the rail transport system and using the railway assets as platforms to remind the living Nigerians of the past good deeds of those after whom the railway stations are named.

“However, we owe it a patriotic obligation, in a critical moment like this and as conscientious labour leaders in the rail transport industry, to lend useful and dispassionate advisory to the policymakers in our industry with a view to adding value to the consultations they may have made on critical issues (as renaming of our railway stations) and helping them to make decisions that will be popular, acceptable and long-lasting.

“To this effect and without prejudice to any of the distinguished personalities whose names have been given to railway stations by the Hon. Minister of Transportation, we strongly demand that the name of Apapa Railway Station be reversed to its old name, Waziri Mohammed Railway Station.”