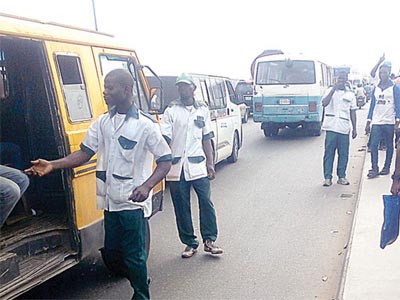 Thousands of members of National Union Of Road Transport Workers (NURTW) Lagos State Chapter, yesterday stormed the Lagos State House, Marina to express their displeasure over the allege anti-union activities of the National President of the Union, Alhaji Tajudeen Baruwa.

The aggrieved protesters were seen carrying placards with inscriptions like ‘Baruwa instigates violence in Lagos State’, ‘We want peace in Lagos State’, ‘We the NURTW members are tired of Baruwa’s extortion’, ‘Stop being manipulative Mr. President (Baruwa)’, ‘M.C Oluomo is a peacemaker’, ‘Tricycle Operators (TOOAN) remains an arm of Lagos state NURTW’ and so many others.

State Deputy chairman, Alhaji Sulyman Ojora, said: “We are here to defend our opinions. It’s peace we need in Lagos State, we don’t want any violence across our garages. That’s why we’ve come to see Mr. Governor on a peaceful protest and submit our letters of complaints. Also, other Executive Council members are on ground to express their feelings without violence.”

In addressing members of the Union, BOS said: “I appreciate you all for coming to lodge complaints peacefully without violence, and I promise to look into the matter as soon as possible.”