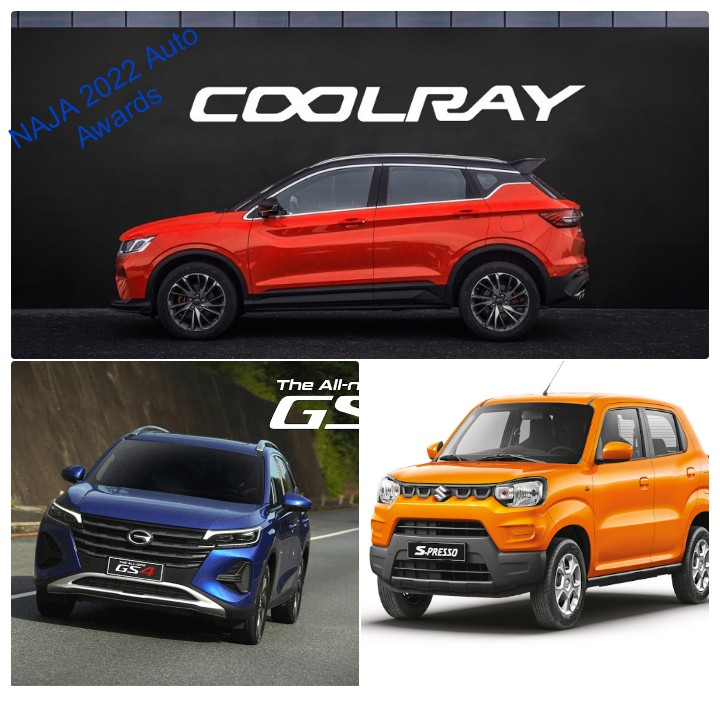 These vehicles were nominated by the Nigeria Auto Journalists Association (NAJA) as finalists for its 2022 Nigeria Auto Industry Awards scheduled for January 25, 2023 at Oriental Hotel, Victoria Island, Lagos.

NAJA Auto Awards is an annual event that celebrates auto brands across the entire auto value chain in Nigeria.

According to the awards committee, dozens of distinguished automotive journalists from different mediums selected the finalists based on their evaluation of each eligible vehicle as part of their professional work.

In the Car-of-the-Year category, Suzuki S-Presso, GAC GS4 and Geely Coolray will battle for the top prize to be presented at the night of the awards.

Finalists for the 2022 awards in other categories have also been announced.

In the Truck-of-the-Year category, the battle is straight between Sino truck Dangote, Shacman – TSS and JAC from Lanre Shittu.

Innoson, Mikano and GAC will slug it out for the Assembly Plant-of-the-Year category.

In the luxury car segment, Porsche, Mercedes and BMW models are the front runners.

In the SUV category (compact), Kia Selto, Geely Coolray and GAC GS4 have been nominated.

Toyota Hilux, Mitsubishi L200 and Ford Ranger will battle for the Pickup-Truck-of–the-Year award.

Giving insights into the nominees, Chairman of the 2022 Award Committee, Rasheed Bisiriyu, said all vehicles nominated in the various categories represent exceptional value and designs.

“We are using our respected, trusted platform to recognise and acknowledge best-performing brands in different segments and categories across the entire auto value chain.”

According to him, the award event, which has now become a major industry show, celebrates and rewards automotive excellence.

He also revealed that Founder/CEO of ABC Transport, Frank Nneji, and Deputy Managing Director of CFAO Motors, Mr. Kunle Jaiyesimi would be honoured with the Auto Personality of the year in recognition of their immense contributions to the development of Nigeria’s auto industry.

Director General of the National Automotive Design and Development Council, Mr. Aliyu Jelani, will also be honoured as Promoter of Local Content in auto assembling in Nigeria.

Late Chairman of Globe Motors, William Anumudu, and Charity Maduka, the late wife of Coscharis Group president, Cosmas Maduka, have been pencilled down for posthumous awards at the event.

In his own comment, Chairman of NAJA, Mike Ochonma, said the auto journalist body has always believed in bringing together all the stakeholders in the automotive sector to build a stronger community and strengthen consumers’ confidence and trust in the industry and their brands.

“I would like to congratulate all the nominees for the 2022 edition and look forward to their presence at the grand ceremony holding in Lagos on January 25,” he added.