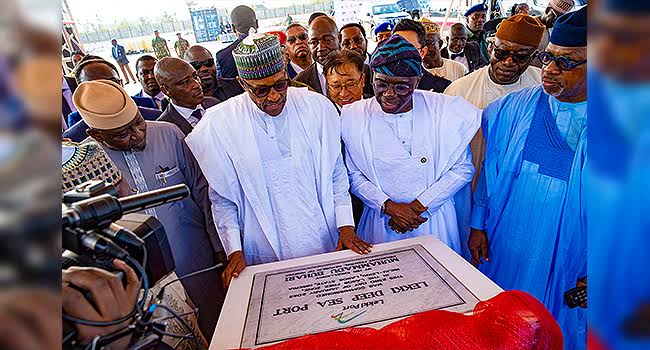 The project, an investment in excess of $1.5 billion, is a joint venture between the federal government, through the Nigerian Ports Authority (NPA), Lagos State Government, Tolarams Group (owners of the Lagos Free Zone), and China Harbour Engineering Company.

“We are excited that in your own time, something fresh has been birthed in this country and it is going to generate thousands of direct and indirect jobs.”

Transport Minister, Muazu Sambo, noted that the inauguration of the project was made possible by the expedited manner the president handled all requests made by the Federal Ministry of Transportation concerning the Lekki Deep Seaport.

The minister stated, “The very fact that the letter of intent between the proponents of Lekki Deep Seaport and its financial partners was signed as recently as April 2019 and by January 2023 the wide-ranging impact project is already being commissioned is a testament to the tenacity of purpose of the Federal Ministry of Transportation through the Nigerian Ports Authority.”

Sambo said, “With seaports being under the Exclusive Legislative List, the Nigerian Ports Authority’s provision of a sinking fund for Lekki Deep Seaport federal government’s equity contribution gave this project the necessary statutory cover and financial guarantee in line with the law.

“Completing a project of the magnitude and impact of a deep seaport in a record time of 45 months shows the effectiveness of tenacious ministerial supervision, strict regulatory oversight and strong presidential backing.

In his goodwill message, Chinese Ambassador to Nigeria,  Ciu Jianchun  said the landmark gateway project jointly built by five parties from four countries was a fitting example of a good business model.

The Chinese Ambassador to Nigeria stated, “This project is a joint venture between China, Nigeria and Singapore, and is run by a French company. The model of ‘five parties from four countries’ is a way of taking advantage of the wisdom and strength of all parties.”

Managing Director of Nigeria Export Processing Zones Authority (NEPZA), Professor Adesoji Adesugba, recalled that when the construction of the port began in June 2020, with the flag-off by Mr. President, very few Nigerians believed that it would become a reality, especially with the challenges of COVID 19 ravaging the country and the entire world at the time.

Adesugba said, “Therefore, we should all be proud as Nigerians that this has not only become a reality, but a free zone has built and completed the largest sea port within four years, which will reposition Nigeria as a regional hub globally for maritime business.”

Speaking earlier, Managing Director, NPA, Mohammed Bello-Koko, said the Lekki Deep Sea Port would be the deepest and most modern port in Nigeria, with a depth of about 16.5 meters, adding that it would be able to bring in bigger vessels and more cargoes.

Bello-Koko said, “Therefore, economics of scale would set in and we believe that the cost of doing business in this country will be lower compared to other countries and it will also provide employment opportunities and it will be more efficient. It will also be a model for other upcoming deep sea ports in Nigeria.”

Jamoh said the Lekki deep sea port would inject nothing less than $361 billion into the economy, while creating over 190,000 job opportunities for the country’s youth.

Executive Secretary, Nigerian Shippers Council (NSC), Emmanuel Jime, said the council had the responsibility of monitoring and ensuring that there was efficacy of service at the port.

Jime said, “Today, when we set our mind to achieve something, all that is required is to have a committed leadership. That is what the president has demonstrated.

“Lekki deep seaport represents a dynamic change as far as the maritime domain is concerned. This is a port that is fully automated. The implication of that is that for once we are going to have a port that will ensure not only that things are conducted diligently but also seamlessly.”

The port is Nigeria’s first deep seaport and is equipped with 13 quay cranes for a capacity of 2.5 million TEUs (Twenty-Foot Equivalent Units) on a 1.2 kilometre quay with a depth of 16 meters, it will operate vessels with a capacity of up to 15,000 TEUs and become one of the largest in West Africa.

Chairman of Lekki Port, Mr. Biodun Dabiri, expressed gratitude to the president and his team for giving all the necessary backing that ensured the project came to fruition.